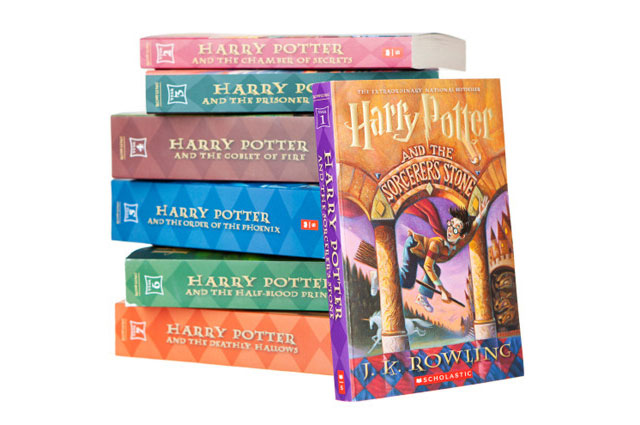 Brian Palmer over at Saturn Scene wrote a great article the other day on J. K. Rowling’s Saturn return.

Rowling was born in 1965 with Saturn in Pisces, so her Saturn return occurred when Saturn went back into Pisces from May 20 1993 until April 7 1996.

Palmer pointed out that this was kind of a rough time in Rowling’s life.  She divorced her first husband in late 1993, and struggled with depression and financial issues during this time.

She had also just had her first child on July 27 1993, right at the very beginning of her Saturn return, and she had to deal with the burden of being a single mother while at the same time trying to finish writing a book that she had begun a few years earlier.

Although we don’t have her birth time, we do know that she has a preponderance of planets in mutable signs in her natal chart, which would explain part of the reason why her Saturn return in Pisces was so crucial in her life. 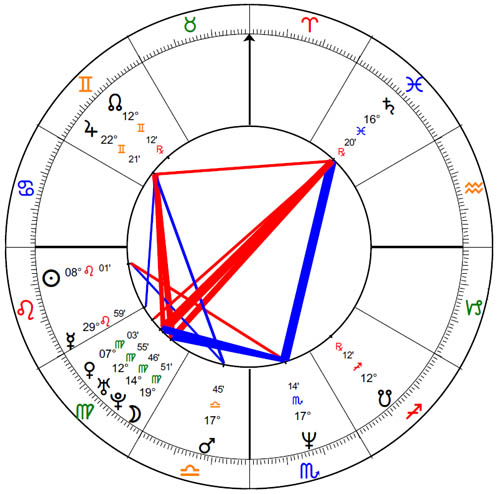 Rowling finally completed the manuscript for the first Harry Potter book in 1995, right in the midst of her Saturn return.

In this way her Saturn return acted as the culmination of several years of work that began when she first got the idea for the book in 1990, but it also acted as a new chapter or starting point in her life that would play out over the course of the next several years as she continued writing additional books in the Harry Potter series.

As it turns out, Saturn’s cycle continued to play an important role in reflecting some of the crucial turning points in her life and in the evolution of the Harry Potter series over the next several years. 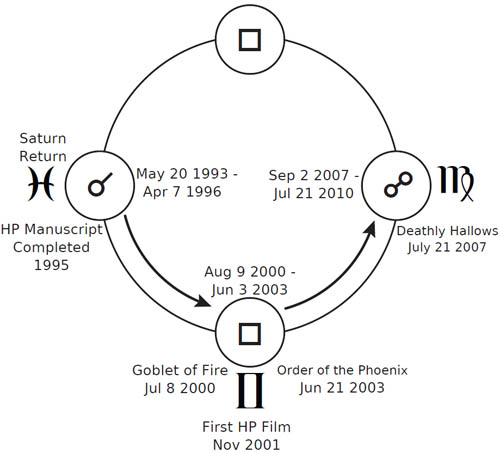 What I noticed when I looked at this cycle within the context of Rowling’s chronology is that she began the cycle at her Saturn return in Pisces by completing the manuscript for the first book around 1995, and then she finished the final book of the series right about the time that she reached her Saturn opposition when it went into Virgo in 2007.  In this way the return acted as a sort of beginning, and the opposition acted as a period of completion.

Additionally, the halfway point in between the Saturn return and the opposition was the first Saturn square, which occurred for her when Saturn moved into Gemini from August 9 2000 until June 3 2003.   This seems to coincide with the period in which Harry Potter really became a worldwide sensation, and sales of the books skyrocketed.   The release of the first film adaptation in 2001 also occurred during this time.  Additionally, Rowling remarried in 2001.

Interestingly, the Saturn square period in Gemini also coincided with the longest gap in between the release of two successive books in the Harry Potter series.   According to the Wikipedia entry:

A wait of three years occurred between the release of Goblet of Fire and the fifth Harry Potter novel, Harry Potter and the Order of the Phoenix. This gap led to press speculation that Rowling had developed writer’s block, speculations she fervently denied. Rowling later admitted that writing the book was a chore. “I think Phoenix could have been shorter”, she told Lev Grossman, “I knew that, and I ran out of time and energy toward the end.”

Harry Potter and the Goblet of Fire was released July 8 2000, exactly two months before Saturn made its ingress into Gemini, and then the next book in the series, Harry Potter and the Order of the Phoenix, was released on June 21 2003, which was just a few weeks after Saturn left Gemini and moved into Cancer.  These two dates almost exactly bookend her Saturn square.

There are two important lessons that are demonstrated here quite well:

In this way the Saturn return can be viewed for many people as part of a continuous process of development that take place during the course of the life.