Lucille Ball was the premier comedienne the world over during the second half of the last century, building on the success of her television comedy I Love Lucy (which debuted in 1951), subsequent comedy series1 and movies2 to become not only one of the most successful Hollywood stars3 but also the first woman to helm an important television studio – Desilu Productions. Desilu was formed in 1950 to support Lucille Ball and Desi Arnaz’s entrance into the world of television, but was actually based on the company Desi formed to manage his band tours during the 1940s. Desilu as a name however, dates back to the ranch in Chatsworth, California that Desi and Lucy bought in early 1941 after they impulsively married at the end of 1940. As this month (August 2011) is the 100th year anniversary of Lucille Ball’s birth it is interesting to look back at Lucille Ball’s first Saturn Return (at age 29 in May 1941). It’s also quite revealing to trace how the decisions she made then changed the course of not only her life, the future development of television and Hollywood entertainment, but also the lives of millions of everyday people the world over – even today!

First, though, we must look at Lucy’s natal chart4 and the condition of Saturn therein: 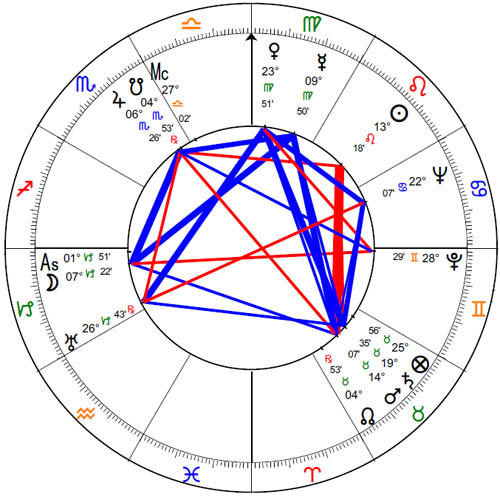 Lucille’s Sun sign is Leo (one for theatrical self-expression) but both her Moon sign and her Ascendant are in Capricorn – the Moon at 7 degrees, the Ascendant at almost 2 degrees. Both of these points are of course subject to the Domicile Lordship (rulership) of Saturn in Taurus, who exercises lasting ramifications for Lucy’s Ascendant (personality, vitality, psychological mask), her 2nd house (values, financial utilization), 10th house (career and profession) and her 5th house (personal creativity, expression). In Lucy’s chart, Saturn is lord of the 1st and 2nd houses, participates to some extent in the 10th house, and is resident in the 5th house (along with Mars, the North Node and the Lot of Fortune). From the 5th house, Saturn dreads an approaching conjunction from a sour Mars, sextiles Neptune in Cancer in the 7th, squares the Leo Sun in the 8th, enjoys a wide trine to an otherwise sour Moon and trines an imprisoned Venus in Virgo. Overall, Saturn expresses somewhat meh in Lucy’s chart – three of Saturn’s planetary aspect partners are poorly placed and the Sun is idle in the 8th house. Finally, Saturn is the malefic planet according to sect in Lucy’s chart; Saturn also is found in the confines of sectmate Jupiter. From these last two indications we can infer that Saturn is not as nasty in Lucy’s chart as he possibly could be. As a result, even when Lucy was at her strictest and controlling5 with her co-stars and/or employees the ultimate affect was positive for not only Lucy but them as well.

“I don’t suppose that hard work, discipline, and a perfectionist attitude toward my work did me any harm. They are a big part of my makeup today, as any of my co-workers will tell you.” – Lucille Ball

So this was the natal Saturn in Lucy’s chart that returned to its natal position of 19 Taurus 35 for the first time6 on May 21, 1941 – when Lucy was 29½ years old. Saturn had actually spent the last half of 1940 approaching his return degree, coming within 5 degrees before turning retrograde.

It was during this Saturn Return period that Lucille Ball met Desi Arnaz, married him in late November 1940 and then spent 1941 and 1942 establishing not only their life together, but also founding the partnership that would not only change the face of television but impact the lives of millions around the globe – even today, two decades after their deaths!

Lucy had wanted to be an entertainer ever since she was a young girl in upstate New York. As soon as she was able she moved to New York to pursue careers in dancing, modeling and theatre – despite being ridiculed for her pedestrian accent and mocked for her dancing ability – or the perceived lack thereof. She was even told by her acting instructors that she was “wasting her [mother’s] money”! Sound Saturnian?

Eventually though Lucy broke through into films and found herself living in Hollywood during the 1930s. She was a hard worker, preferring to focus intently on her career. As a result, she had little time, energy or patience for dating and romance. The few men she dated proved unsatisfactory or marginally acceptable for one reason or another – and it was with this ingrained attitude that Lucy entered her Saturn Return season. Little did she know the changes in her life that Saturn was about to introduce.

In mid-1940 Lucy traveled to New York to preview a musical property – Too Many Girls – that her movie studio had just bought the rights to – with a role for Lucy in mind. When she finally attended the musical she was struck by the Cuban bandleader who seemed to have boundless energy and what Lucy would later term “star quality“. However, she quickly decided that he was too young for her – Lucy in fact was 6 years older than Desi – and put any possible dating thoughts out of her mind. After the show Lucy stopped by the director’s table to network a bit – and Desi happened to be there. This was their first meeting… and it didn’t go well. Desi was still in costume dressed to mimic a college football player; unbeknownst to Desi, Lucy was also dressed in costume as a coarse, aggressive stripper – a long, slit-up-to-here gown, bleached-blond hair and a fake black eye (Lucy had just finished filming a fight scene with her film’s leading actress, Maureen O’Hara). Desi took her for a real hooker (or at least a hooker wannabe) and was not impressed at all. In fact he immediately forgot about Lucy.

That evening at rehearsals however Lucy showed up after changing. She was now wearing tight-fitting slacks and a sweater…and Desi was immediately smitten (as was Lucy with Desi)! Their meeting turned into a whirlwind, passionate and exciting courtship that culminated on November 30, 1940 with an impromptu wedding. By March of 1941 Desi and Lucy had bought their first new home and christened it Desilu Ranch – the first time this mashup moniker was used. 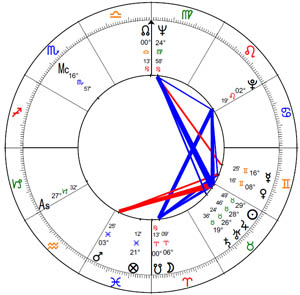 “My ideal of womanhood has always been the pioneer woman who fought and worked at her husband’s side. She bore the children, kept the home fires burning; she was the hub of the family, the planner and the dreamer.” – Lucille Ball

More importantly for the world however was the creative union of Lucille Ball and Desi Arnaz – and not just because of family reasons. Their relationship was wildly improbable – not only was Desi 6 years younger than Lucy, he was of a different religion (Catholic to Lucy’s Baptist) and of course he was a different nationality, Cuban. In 1940 these were serious stumbling blocks to a marriage relationship in a best-case scenario – and the kiss of death for a successful relationship in celebrity relationships.

As Desi was a player with the women, Lucy was desperate to find a career niche where they could be together. Throughout the 1940s they tried several different mediums – movies, music, theatre, vaudeville routines – but nothing jelled, nothing took off for them. By the end of the 1940s with Lucy in her late thirtysomethings she finally decided that her B-movie career was not going to evolve into an A-movie career. So she and Desi decided to try television with a comedy show based on themselves and their relationship – I Love Lucy. The rest is history… except that what made Lucy so popular was due to not only Lucy’s talents as a comedienne, but just as much to Desi’s talents as a visionary and businessman. Desi pioneered the three-camera technique (still in use today) for filming television shows; Desi also insisted on taping the episodes – which founded the lucrative television syndication industry. It’s been said that due to syndication I Love Lucy is playing somewhere in the world at any given moment of the day. Together, Lucy and Desi built Desilu Productions into a powerhouse Hollywood studio – and when Lucy and Desi divorced in 1960 and Desi sold his interest in Desilu to Lucy, she became the first major female studio head in history, producing many of television’s most popular series during the Sixties.

None of this would have been possible had Lucy not hooked up with Desi at the time of her Saturn Return! 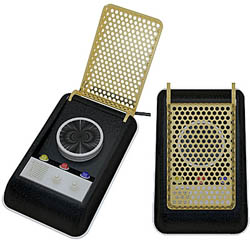 But how is Lucy’s Saturn Return from 1940-1941 still affecting millions of people around the world even today? Pull out your cell phone, your smart phone. Notice how the designs of these cell phones remind you of the communicators from Star Trek? Many of the designers creating cell phones grew up watching and inspired by Star Trek – and have brought a piece of Star Trek alive by basing smart phone designs on the fictional Star Trek communicator.

But what does this have to do with Lucy? When the television pilot for Star Trek was being shopped around in the early Sixties, no one would buy it. No one understood its story nor its potential. The people behind Star Trek were ready to give up on it when Lucy personally intervened, accepted the project and ordered Desilu to proceed with the project. And of course, again, the rest is history.

And the reason why Lucy was in a position to make this kind of unilateral decision was because of the tremendous popularity and strength of I Love Lucy. In turn, I Love Lucy’s popularity was due in large part to the creative union – and the merging of their individual strengths – of Lucille Ball and Desi Arnaz. And this relationship between Lucy and Desi was established during her Saturn Return of 1940-1941.

So in your own Saturn Return experiences pay close attention to the decisions that you make at this time. You never know the ramifications that might result from seemingly minor, personal choices that you might make!

1Including The Lucy-Desi Comedy Hour, The Lucy Show, Here’s Lucy, and Life With Lucy

2Including Roman Scandals, Room Service, Follow the Fleet, Stage Door, Five Came Back, Too Many Girls, Sorrowful Jones, The Long, Long Trailer and Yours, Mine and Ours

3Her movie career alone spanned five decades and over 80 movies

5Lucy was often very hard on those around her; several times she reduced her co-star Vivian Vance to tears

8Interestingly Lucy’s Natal Jupiter falls in the seventh house in her Lot of Fortune chart (which puts the Lot of Fortune in the 1st using Whole Sign Houses (similar to Solar houses)). 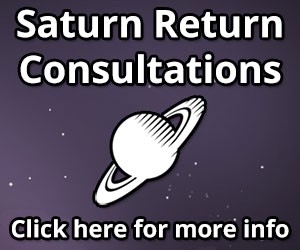