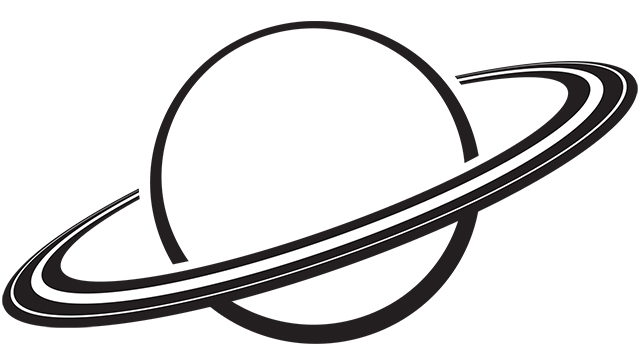 The purpose of this article is to provide some tips for how to interpret the Saturn return, in order to find out what it means in your life by looking at it within the context of your birth chart.

Perhaps you’ve recently learned about the phenomenon known as the “Saturn return,” but don’t know what it will mean specifically for you.

By following the tips below, you will develop a more detailed understanding of your own Saturn return, and the types of themes that you might expect to see emerge during the course of that period in your life.

1. Determine When Your Saturn Return Will Occur

First, you need to know where Saturn was when you were born, since by definition the “Saturn return” is the period of time when Saturn returns to the same location in the sky that it was in at the moment of your birth.  For the purpose of this article you need to know both the sign of the zodiac and the exact degree that Saturn was in when you were born.

Once you have figured out the location of Saturn when you were born, the next step is to determine when your Saturn return will take place.  For the details on how to do this, please see my other article titled How to Calculate Your Saturn Return.

This brings us to the first interpretive principle of this article:

The Saturn return begins as soon as Saturn moves back into the same sign that it was in when you were born, and it ends when Saturn leaves that sign.

While it is accurate to say that the period immediately surrounding Saturn’s return to the exact degree it held in your birth chart is a particularly pivotal and sometimes climactic time during the course of the overall Saturn return, it is important to understand that the return itself actually begins once Saturn returns back to its natal sign. 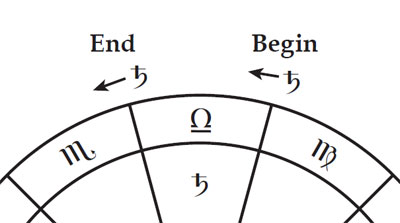 Since Saturn can sometimes move back and forth across sign boundaries for several months due to retrogrades, the main thing that you need to take into account is the first time that Saturn goes back into the natal sign and then the last time that it leaves that sign for the next couple of decades. This gives you your start and end dates.

So, for example, if you were born with Saturn in Libra then your Saturn return began around October 29, 2009, when Saturn made its first ingress back into Libra since the early 1980s. Saturn-in-Libra folks will end their Saturn returns around October 5, 2012, which is when Saturn will move out of Libra and into Scorpio, not to return to Libra again for another couple of decades.

While some of these dates might be expanded a bit if you were born with Saturn very early or late in a sign, the important period to focus on is when Saturn will return to the same sign as when you were born.  Once you have this figured out, then you know when your Saturn return will take place, and can proceed with trying to identify what will happen in your life during that time frame.

Now that you know when your Saturn return will occur, the next step is to figure out what will happen during that period of your life.

The first step in this process is to determine whether Saturn tends to function in an easier or more difficult manner in your chart.   While ancient astrologers generally referred to Saturn as a “malefic” planet, since it often tends to coincide with events in our lives that we experience as not very enjoyable, there is actually a wide spectrum of ways in which the events that Saturn indicates can work out.  One of the principal ways to determine whether you will tend to experience Saturn as being more positive or negative in your chart is through the astrological concept known as “sect.”

Broadly speaking, the concept of sect is used in order to make a distinction between people who were born during the day and people who were born at night.  The premise is that some of the planets function differently depending on whether a person has a day chart or a night chart.  This becomes especially important when it comes to Saturn’s position in the natal chart.

This brings us to our second principle in interpreting Saturn returns:

This is a pretty straightforward rule once you figure out if you were born during the day or at night. 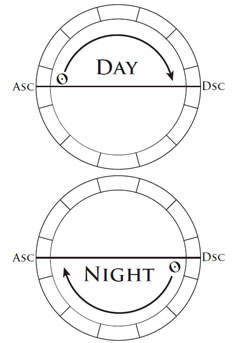 In order to determine this, you just have to see whether the Sun is above or below the ascendant/descendant axis in the chart, which basically represents the horizon.

3.  The House that Saturn is in

Once you have determined when the Saturn return will take place and whether it will tend to be experienced as more constructive or challenging, the next step is to figure out which topics will be the focus of your Saturn return.  For this we look to the house where Saturn is located in your natal chart.

This brings us to our third interpretive principle for understanding Saturn returns:

The topics associated with the house that Saturn is in natally will become more prominent in the person’s life during the Saturn return. 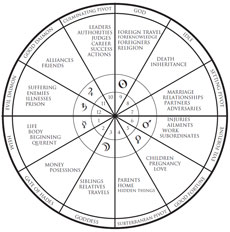 Here is a list of some of the main significations of the houses in order to give you some idea of what topics might come up for you if your natal Saturn is located in a certain house:

4. The Houses That Saturn Rules

In addition to the house where Saturn is located in the natal chart, you also should pay attention to the houses that Saturn rules in the chart, as the topics associated with these houses also often come into prominence during the course of the Saturn return.

For our purposes here we will be using the traditional rulership scheme, in which Saturn rules both Capricorn and Aquarius.  I would also still recommend that you use whole sign houses, which were explained earlier.

This brings us to interpretive principle number four:

When Saturn returns back to its natal position it will not only activate some of the topics related to the house that it is located in natally, but also topics associated with the houses that it rules in the natal chart as well.

What you may have noticed at this point is that during the Saturn return there can be as many as three houses being activated.  There is the house that Saturn is in natally, and then there are the two houses that Saturn rules.  Now, in some charts there will be some overlap so that there are only two houses being activated, for example when Saturn is in one of the signs that it rules.  Either way, though, there will be two to three houses activated in a chart during the course of the Saturn return.  To a certain extent this explains why the Saturn return is often experienced as a particularly crucial time or period of culmination in several different areas of a person’s life.

5.  Hard Aspects With Other Planets

The final tip for interpreting the Saturn return is to pay attention to aspects that Saturn makes to other planets in the natal chart, as these configurations will become activated during the Saturn return, and they can help to characterize how it will be experienced.

In particular you should focus on the hard aspects that Saturn makes to other planets in the natal chart, as these will be the most important configurations during the Saturn return.  By a “hard aspect” I mean the conjunction, square or opposition.

This brings us to interpretive principle number five:

Whatever configurations Saturn makes to other planets in the natal chart, especially hard aspects, those configurations will be activated during the course of the Saturn return. 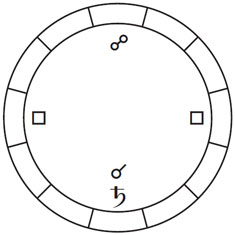 Now, to a certain extent any configuration between Saturn and another planet will be somewhat difficult, but there are some types of configurations that will be easier than others.  So, for example, if Saturn is in the same sign as Jupiter in the natal chart then the Saturn return will often be experienced as more positive than if Saturn is opposed by Mars in the natal chart.  In both cases it is simply the natal configuration that Saturn makes to other planets in the chart which is being activated, although in some instances this is experienced as more positive, while in others it is more challenging.

For the purpose of studying the Saturn return I would recommend using sign-based aspects, so that, for example, any planet in Leo is square to any planet in Scorpio.  Similarly, if two planets are in the same sign they are considered to be in conjunction, regardless of how far apart they might be in terms of degrees.

Part of the purpose of primarily focusing on the hard aspects to Saturn is that the planets in these signs are also located at the crucial turning points in the broader Saturn cycle.  What I mean by that is this: Saturn takes almost 30 years to make one complete revolution around the zodiac.  This cycle can be divided into four major phases, which have as their focal points 1) the waxing square, 2) the opposition, 3) the waning square, and then finally 4) the Saturn return itself.  The waxing square is a quarter of the way through the cycle, the opposition is halfway through, the waning square is three quarters of the way through the cycle, and the return itself represents the completion of the cycle.

Oftentimes themes that begin to develop at the very beginning of the cycle will reach critical turning points as Saturn makes its way through each of these phases.  This is part of the reason why it is particularly important to pay attention to planets that are configured to Saturn by hard aspect natally, since they will be in the signs that are aligned with these pivotal turning points.  By identifying the aspects involved you can determine not just what themes will be present during the Saturn return itself, but also what themes will play out over the course of the next 30 years, as Saturn makes its way through its cycle.

Each person’s natal chart is unique.  Although we all have our Saturn returns sometime around the ages of 27-30, it is the unique position that Saturn holds in our birth charts that allows for the variety of experiences that each of us encounters during this time in our lives.

By applying the tips in this article you should begin to recognize the distinctive qualities of Saturn’s placement in your own chart, and in doing so you will start to understand what to expect when it becomes awakened during your Saturn return.

For those of you who would like some help calculating your Saturn return and interpreting what it means, we are now offering 75 minute Saturn return astrology consultations over the phone.