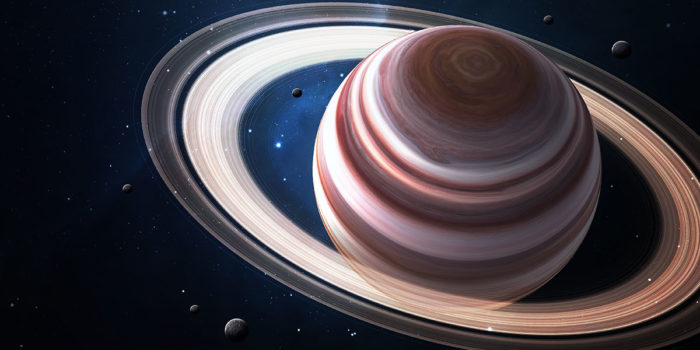 The purpose of this article is to show you how to calculate when your Saturn return will take place. It assumes little to no prior knowledge of astrology, and only employs tools that are freely available online.

For tips on how to interpret the Saturn return once you have calculated when it will happen, please see my previous article titled Five Tips for Interpreting the Saturn Return.

I also made a video which covers some of the main points in this post, so if you would like to watch that first then just skip to the end of this article.

If you have any questions, please feel free to post them in the comments section below.

What is the Saturn Return?

First let’s define our topic. What is the Saturn return?

The Saturn return is a period of time in a person’s life when the planet Saturn returns to the location that it was in when they were born.

Find Out Where Saturn Was When You Were Born

I would recommend that you go to www.astro.com and then enter your birth information on their free birth chart calculation page. If possible, make sure that you include the correct birth time and location, preferably from your birth certificate, since for some people this can make a big difference. 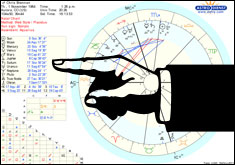 Once you have a copy of your birth chart, over on the left side of it you will find a box which lists all of the planets and tells you what signs they were in when you were born. In the example to the right Saturn is listed as being at “17 Sco”, which means that when this person was born Saturn was at 17 degrees of Scorpio. There are only 30 degrees in each sign of the zodiac, so the number listed will always be somewhere between 1 and 30, and then it will list the name of the sign your Saturn is in. Pretty simple, right?

You will also notice that there is a little symbol next to each of the planets. These are known as planetary “glyphs”, and they are important because they are often used as shorthand to designate the positions of the planets in astrological charts. The symbol for Saturn is particularly important for our purposes, so you should make sure that you memorize what it looks like. If you need some help figuring out how to draw it then check out my tutorial on how to draw the astrological glyphs.

Although there are some variations, generally the glyph for Saturn looks like this:

Calculating When Your Saturn Return Will Take Place

Just as the Sun was in one of the twelve signs of the zodiac when you were born, which is what designates a person’s “Sun sign” or “sign” for short, each person also has a “Saturn sign”, which is probably different from their Sun sign.

In the previous step I showed you how to obtain a copy of your birth chart, and how to locate Saturn in it by identifying the glyph or symbol for Saturn. You also should have identified which sign of the zodiac that Saturn was in at that point as well, as the first three letters of the sign are listed just to the right of Saturn in the list. If Saturn is in Scorpio, then it says “Sco”. If it is in Aries, then it says “Ari”, and so on.

Here is a table that shows the symbols for each of the signs of the zodiac next to their names, just in case you need a reference: 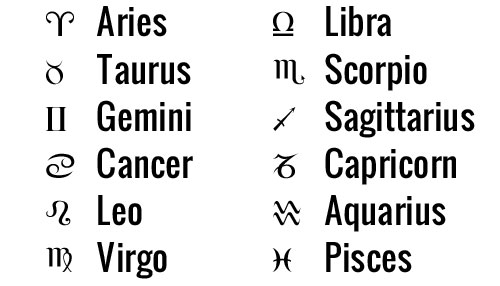 You should now know what sign of the zodiac your Saturn is in, and how to identify the symbol that is associated with that sign.

Using an Ephemeris to Find When the Saturn Return Begins

So let’s find out when Saturn will return to the sign it was in when you were born. In order to do this we have to look at an “ephemeris,” which is a book that contains a list of all of the locations of the planets on each day of a given year. Luckily for us, www.astro.com also offers a free online ephemeris, which you can download in PDF format. 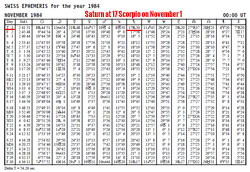 What you should do first is look through the list of years towards the top of the page, find the year that you were born, and then open that file. Next, scroll through the PDF file and find the month and exact day that you were born. Find the column that lists the position of Saturn, and then check and make sure that it lists the same sign and degree as it did in your birth chart. The purpose of this step is mainly to become familiar with the symbol for the sign of the zodiac that your Saturn is in, and to see what that looks like in this particular ephemeris. 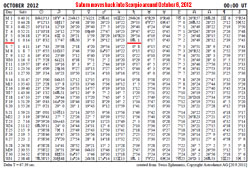 The next step is to go back to the free ephemeris page, and now select a year about 27 or 28 years after the year you were born. Open that file, and then identify which sign Saturn is in in that year, and then go through each month and see if it moves back into your natal Saturn sign sometime during the course of that year. Basically what we are trying to do at this point is just determine when Saturn will first move back into the sign of the zodiac that it was in when you were born.

When you finally find the date that Saturn moves back into the first degrees of the sign it was in when you were born, write that date down, as that is the beginning of your Saturn return.

I recently compiled a list of dates for when the Saturn return starts and ends for different people depending on what sign it was in when they were born. You can use this as a sort of shortcut or cheat sheet if you have already figured out what sign Saturn was in when you were born, and you just want to know when your Saturn return will begin and end.

However, you may also want to find out when the Saturn return goes exact, because sometimes this will coincide with a particularly important time during the course of the Saturn return. In that case, read on…

Determine When the Saturn Return is Exact

Once you have determined when Saturn will return back to its natal sign, the next step is to determine when it will return back to the exact degree that it was in when you were born. Although the return of Saturn to the natal sign usually marks the beginning of the Saturn return, oftentimes some of the most pivotal events during the course of the two year Saturn return period take place around the time that Saturn returns back to the exact degree it was in at your birth.

In order to do this you simply have to recall what degree Saturn was in in your birth chart, and then go through the ephemeris until you find the date when Saturn returns back to that exact degree. 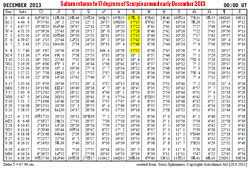 In our example chart Saturn was at 17 Scorpio, and according to the ephemeris Saturn gets back to 17 Scorpio for the first time around late November/early December of 2013. This is the exact Saturn return.

There is a slight complication, though. Because of the phenomenon known as retrograde motion, for a few months during every year Saturn will actually stop moving forward through the degrees in each sign, and instead it will turn around and start moving backwards for a while, retracing its path. As a result of this, Saturn can actually move back and forth over the exact degree of the Saturn return up to three times before it finally moves on.

So, for example, Saturn first makes it to 17 Scorpio in late November/early December 2013, and then it keeps moving forward, but then it retrogrades back to 17 Scorpio a few months later in June of 2014. Eventually it starts moving forward again, at which point it moves over 17 Scorpio a third time in August of 2014. All three of these exact hits are extremely important, as they can be the focal points of the entire two year transit, so take note of when they will occur.

The following diagram illustrates what a Saturn retrograde period looks like from the perspective of its movement through one of the signs of the zodiac over the course of several months. 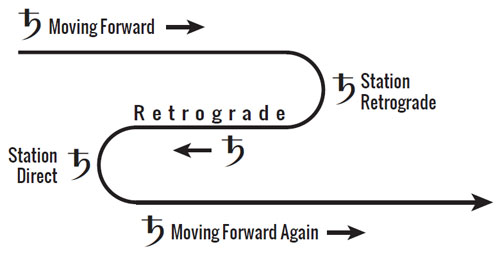 Determine When the Saturn Return Will End

The final step is to determine when your Saturn return will end, which basically just occurs once Saturn moves out of your natal Saturn sign.

In order to figure this out you just need to look through the ephemeris, and watch as Saturn gets closer and closer to the end of the sign. Eventually you will see it get to 29 degrees of your natal Saturn sign, and then all of a sudden it will shift into zero degrees of the next sign.  This departure of Saturn from your natal Saturn sign generally marks the end of your Saturn return. 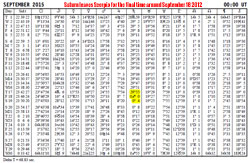 It is this last departure from your natal Saturn sign that is the most important, because it marks the last time that Saturn will be in the sign it was in when you were born for another two and a half decades.

So the Saturn return officially ends when transiting Saturn moves out of your natal Saturn sign for the last time during that time period, and isn’t going to retrograde back into that sign again anytime soon. Once you have found this date, you have determined when you will complete your Saturn return.

That’s it for this guide on how to calculate your Saturn return. You now know how to determine exactly when your Saturn return will start, when it will peak, and then eventually when it will end. Now the only trick is to figure out how to successfully navigate your way through it. For that I would recommend reading through some of the other stories on this blog, and learning from the mistakes as well as the successes of others.

Have Your Saturn Return Interpreted by An Astrologer

For those of you who would like some help with calculating your Saturn return or interpreting what it means in your life, we are offering Saturn return astrology consultations over the phone or through Skype.

After I wrote this article I made a video which summarizes some of the same points in this post, for those who learn better from audio/visual presentations rather than reading.   Here it is: