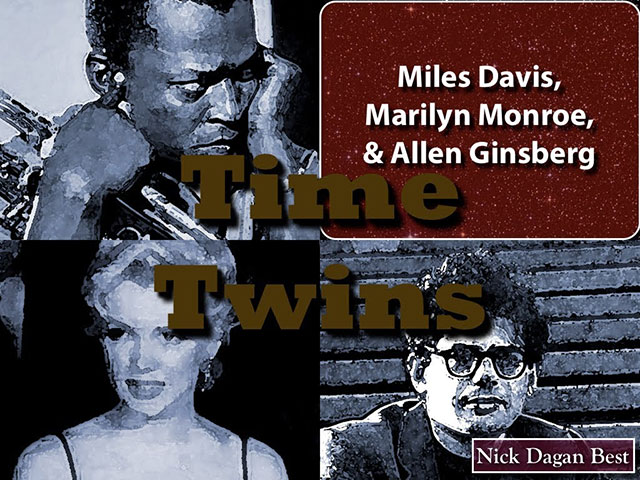 Astrologer Nick Dagan Best posted a video on his YouTube account the other day in which he talked about the birth charts of Miles Davis, Marilyn Monroe, and Allen Ginsberg, who were all born within 8 days of each other, thus making them what is loosely known in astrological circles as “time twins.”

In the first half of the video Nick focuses on what was happening during each person’s Saturn return, which makes for some really interesting Saturn return stories.

They are particularly topical now since all three have Saturn in Scorpio, and I think that we can gain some insight into what the Saturn return in Scorpio is all about by looking at these examples.

You can watch the video below, followed by a transcript that Nick provided for us:

On December 14th, 1954, Allen Ginsberg flew to New York City from San Francisco to attend his brother’s wedding. While in New York, he also visited his mother Naomi in a sanatorium; she had previously attempted suicide.

At this point in his life, Allen was still an unpublished author. Unlike the other two characters in our story, he was not yet established in this field. He was still struggling, supporting the works of friends like William Burroughs and Jack Kerouac.

Returning to San Francisco he soon met Peter Orlovsky, who would be his partner up until the end of his life – a forty two-year romance was now beginning.

As Allen’s trip began, transiting Venus and Saturn were conjunct his natal Saturn in Scorpio.

Already a well-known movie star, she was craving respect. Recently divorced from Joe DiMaggio, she was refusing to do films for Fox because the scripts did not meet her satisfaction. She wanted to be taken seriously as an actress.

At the time Marilyn began studying with Lee Strasberg, transiting Saturn was conjunct her natal Saturn retrograde in Scorpio.

Just a little over a month later, on March 12, 1955, legendary jazz alto sax player Charlie Parker – otherwise known as “Bird” – passed away at the age of 34, due to the physical abuse he put himself through due to drug addiction and alcoholism.

Miles had begun playing with Charlie when he was 18 years old, and although he learned everything he knew about jazz from the man, there was also a lot of resentment.

Just over six months later on September 27 1955, John Coltrane joined the Miles Davis Quintet. Miles was a recovering drug addict, clean for about two years. However, the other four members of his group were still heroin users, and Miles would struggle to keep them all in line as they made music history.

Coltrane would be in Miles’ group for the next five years, and during that time he would transform himself from a mediocre, drug-addicted musician to an absolute powerhouse.

At the same time Miles had recently signed to Columbia Records; he was now becoming the highest paid jazz musician.

Two weeks later, on October 7th, 1955, Allen Ginsberg debuted his new poem Howl at a reading at a place called Gallery 6 in San Francisco. The reading is now legendary, accounted for in writings by Jack Kerouac and others.

The poem is Saturnian in that it mourns young people who met tragedy. At the time of the reading, transiting Saturn was conjunct Allen’s natal Saturn retrograde in Scorpio.

It was clear that the character Jayne Mansfield was playing was a spoof of Marilyn Monroe’s screen persona. It must been tough for Marilyn, struggling at that time to be taken seriously as an actress, to see herself parodied right in front of her face.

At the time she saw the show, transiting Saturn was conjunct natal Saturn retrograde in Scorpio.

In these three cases – whether it was Marilyn Monroe, who was already close to the top of her success, Miles Davis, who had already enjoyed success, fallen, and was now re-inventing himself, or Allen Ginsberg, who up until this time had always been anonymous – our three characters, feeling their Saturn Return, were pursuing the goals that were most important to them and, regardless of what they had already achieved, felt like they were starting over from scratch.