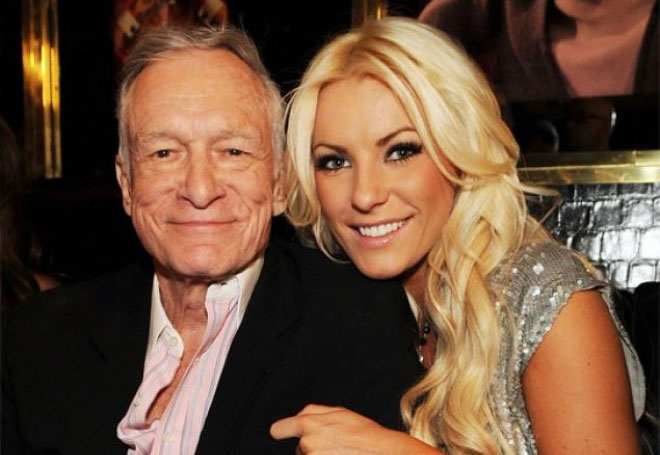 It doesn’t happen often, but I’ve finally come across a third Saturn return story to feature. As you may know by now, structures of all kinds are up for review during the Saturn return, and relationships are often a featured topic. Marriage and separation are common occurrences, as people get serious about their lives.

Proving that it’s never too late, Hugh Hefner, founder of Playboy magazine, got married on December 31, 2012, a few months into his third Saturn return, at the age of 86. Of course, Hefner is hardly new to dating habits that raise eyebrows, and he has kept up the trend here:  his new wife, Crystal Harris, is sixty years younger than him at age 26.

I’ve never had cause to look at Hugh Hefner’s birth chart before, so I was pretty amused when I pulled it up. The moon and Venus, two general significators of women, are both in Pisces, a sign related to both photography and idealization. Venus in Pisces can easily represent idealized beauty. 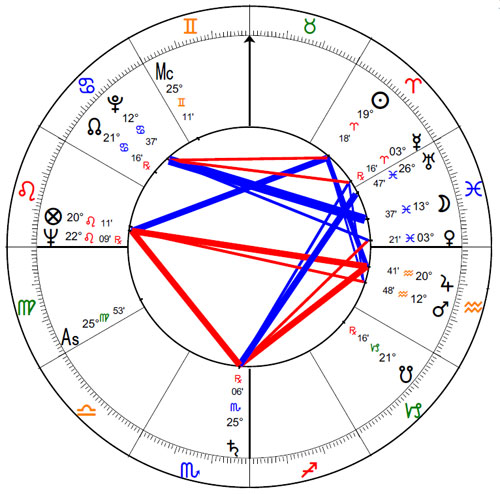 These planets occupy Hefner’s 7th house of partnership, so this also describes the women with whom he forms relationships. Uranus, a planet associated with things contrary to the norm as well as sudden changes, sits less than one degree from his descendant, lending extreme oddball character to his relationship life. Having age differences between partners is one common way this can work out; Hefner’s previous wife was 36 years younger than him. He is also somewhat infamous for maintaining relationships with multiple young women at once in past years.

Hefner’s Saturn in Scorpio squares the ruler of his 7th house of partnership, which is Jupiter in Aquarius. This is one reason why marriage could come up as a topic right now, in addition to the general structural themes of the Saturn return. Other planets strongly aspecting Saturn, especially by square or opposition, will also have their topics and those of the houses they rule arise at the Saturn return. Saturn is actually closely trine his descendant as well.

The Uranus return was also helping out here, which was exact between 2009-2011 for Hefner. While not everyone is even alive long enough to experience their Uranus return around the age of 84, Hefner had that play out with a divorce from his 2nd wife in 2010 after a long separation, followed by getting engaged to Harris later that year. Harris also suddenly backed out of their engagement in 2011, 5 days before their wedding was to take place.

It is notable that Hefner actually started Playboy magazine, the enterprise/brand he would be known for during the rest of his life, at his first Saturn return. The first issue was published in December 1953, just a couple months into his first return.

Hefner’s Saturn in Scorpio is in the 3rd house, often called the house of communication, and rules both the 5th and 6th houses. The 5th house is considered the house of pleasure, and includes sex, children, and general recreation. How fitting, then, that what Hefner is known for is publishing a semi-taboo, sexually related magazine.

Hefner still has until late 2014 before his Saturn return in late Scorpio is exact, followed shortly thereafter by the beginning of Harris’s (first!) Saturn return. Rampant internet speculation about the couple’s motives notwithstanding, I wish the newlyweds much happiness.