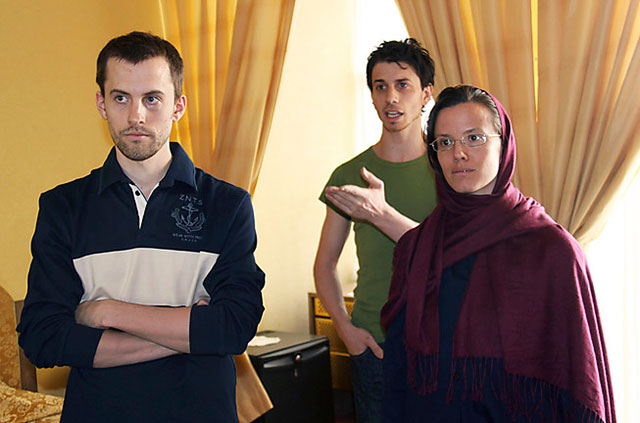 Shane Bauer and Josh Fattal, Americans jailed for two years in Iran on charges of spying and illegal entry into the country, were recently convicted and sentenced to eight years in prison by the Revolutionary Court of Iran. A third hiker, Sarah Shourd, spent 410 days in solitary confinement before being released last year due to health reasons. The three were hiking near the border of Iraq and Iran on July 31, 2009 when they were apprehended by Iranian authorities alleging that they had illegally crossed into Iran.

Shourd, now 33 years old, was going through her Saturn return in Virgo when they were taken into custody. She was released on September 15, 2010,  just two months after transiting Saturn left Virgo for the last time. Bauer and Fattal both recently turned 29 and are experiencing their Saturn returns right now in Libra.

Some of Saturn’s possible significations can include confinement, isolation, and harsher conditions than usual. Most people will obviously not experience that to this extent even when under Saturn transits, but it is striking that this unexpected imprisonment did in fact happen during the hikers’ Saturn returns. That their Saturn returns are happening in Libra also seems like it’s adding in the theme of justice, one of Libra’s significations.

To add a more common and positive Saturn return theme to otherwise uncommon circumstances, Bauer and Shourd also got engaged to be married while in prison, on January 6, 2010. This was just a couple months after transiting Saturn entered Libra for the first time, and thus began Bauer’s Saturn return. Saturn was also within a week of stationing, temporarily emphasizing that energy even more. People often make and/or break major commitments during their Saturn returns as they soberly evaluate their life structures and what is truly important to them. Saturn transited through Virgo one last time from April through July of 2010, so Bauer and Shourd’s engagement was essentially the overlap of both of their Saturn returns.

Bauer and Fattal were born within a month of each other, on June 4th and July 13, 1982, so their respective exact Saturn returns are due to happen almost simultaneously, between September 5th and 8th, 2011. They were sentenced on August 21st and now have just 20 days to appeal, the end of which will be during this exact transit. This is obviously a pivotal time for all three of the hikers and their families, and I wish them a quick reprieve. If you’d like to view up-to-date news and ways to help, visit the website freethehikers.org.