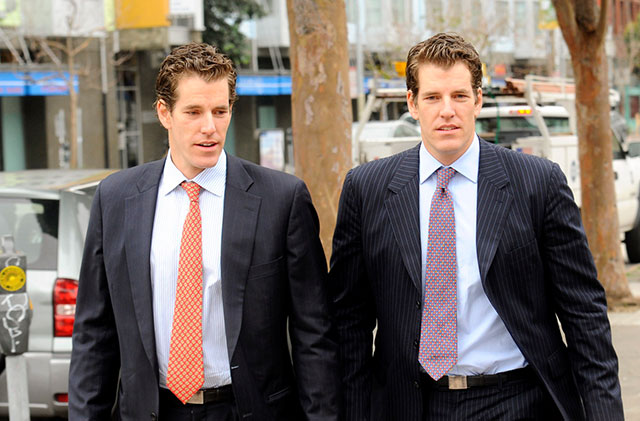 Tyler and Cameron Winklevoss, of Facebook lawsuit fame, are currently experiencing their first Saturn return in Libra, and have been since 2009. Their Saturn return was exact the week The Social Network was released, the film that told the partly fictionalized story of Facebook’s founding and the Winklevoss twins’ ensuing legal fight for compensation. Sept 24, 2010 was the film’s first release date at New York Film Festival, and then the big general release was Oct. 1, 2010. Since we don’t have a birth time for them we don’t know the exact minutes of their Saturn degree, but transiting Saturn would have hit 7’31 mid-week (Saturn in their noon chart, below), in between the two movie releases. 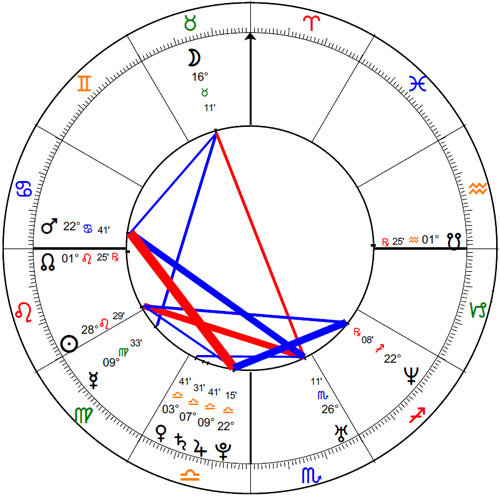 They started the lawsuit 7 years ago, one quarter of a Saturn cycle back. Saturn was then in Cancer and transiting their tight natal Mars-Pluto square, which speaks of the potential to get into major power struggles, as well as their much commented on inability to give up on the lawsuit. “[Quitting] is not in our DNA,” Tyler Winklevoss stated in a recent interview piece in Vanity Fair. According to a Harvard Crimson article written back when this all started, the lawsuit was first filed on September 2, 2004, when transiting Saturn was just a degree past the Mars-Pluto square, so they were probably planning it out when it was exact just prior to this. Since their Saturn return was the first square from when they began the lawsuit, it should have marked a major turning point in the case. And indeed, their Saturn return at first appeared to be coinciding with meeting some realism regarding this and relinquishing their attempts to get more money – they dropped the appeal, finally, earlier this year – but then they filed a different suit the next day.

The Winklevoss twins actually have a pretty nice looking chart, even without knowing the time. This echoes their actual very fortunate lives, and why the continuing lawsuit has turned into a bit of a joke, that they are still arguing they deserve more compensation after being awarded a settlement valued at $65 million.  The Sun, Mercury, and Venus  in their natal chart are all placed in their own signs, and the Moon and Saturn are exalted. Saturn is also enclosed by the benefics (the benefic version of ‘besiegement’). I find it interesting that with 4 planets in Libra they are pushing so hard on the legal angle, since one of the common themes associated with the sign of Libra is justice/fairness. Perhaps with Saturn there, even though it’s got some nice help from Venus and Jupiter, they will still have to learn that there are limits in the pursuit of  ‘fairness.’

Aside from the Facebook lawsuit saga and the movie release regarding that, the twins also earned MBA degrees in 2010 from the University of Oxford during their Saturn return, and will go on to compete for the second time on the U.S. rowing team during next summer’s Olympics before their Saturn return is through in October 2012. They started rowing when they were 14, at their first Saturn opposition, so the coming Olympics should bring to fullness what they’ve been pursuing since then. I will be keeping an eye out for the results next year.